Westferry Circus is a prestigious office building located on the north perimeter of the impressive Canary Wharf business hub in London.

Constructed in 1996, the nine storey building underwent a refurbishment in 2012 which included improvements to the four car group lift system.

The challenge for the lift overhaul was to improve the passenger handling and performance of the lifts whilst at the same time showing a reduction in energy consumption. The building manager had previous experience of destination control systems in other properties which he managed and was keen to see the benefits applied to 11 Westferry Circus

Through a rigorous tender process, TVC were delighted to be selected as the supplier for the new lift control system and the Ethos Navigator Destination Control system was installed to replace the Swift Futura controllers.

The Ethos Navigator not only provides Destination Control for Westferry Circus but integrates seamlessly with the ‘speedgate’ electronic turnstile entrance.

One of the concerns that building owners can have when changing from a conventional ‘two button’ lift system to Destination Control is the reaction of their tenants to the new technology, however, the building manager noted “I find the display screens easy to use for tenants and the display is very clear” 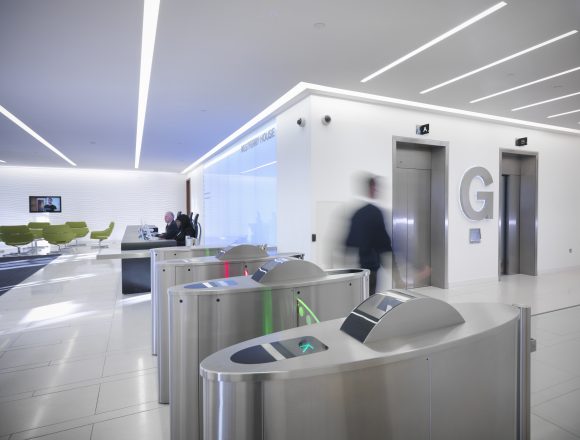 Satisfaction levels in the building are certainly high confirming, “I would certainly put TVC equipment into another building” and went on to commend TVC support and technician Adrian Bacchus in particular; “I would recommend the service and support provided, especially Adrian who is very professional, helpful and knowledgeable”

Passengers with disabilities are also catered for with a dedicated assistance button providing both audible and visual instruction and feedback supported by customised lift operation to suit their mobility needs.

Today’s tenants expect and demand high performance from the building and lifts; Westferry Circus and TVC have proven to deliver.

The building manager quoted. “I have noted a reduction in lobby queues in the morning even though there are more building occupants than before the lift refurbishment”

Stay in the know